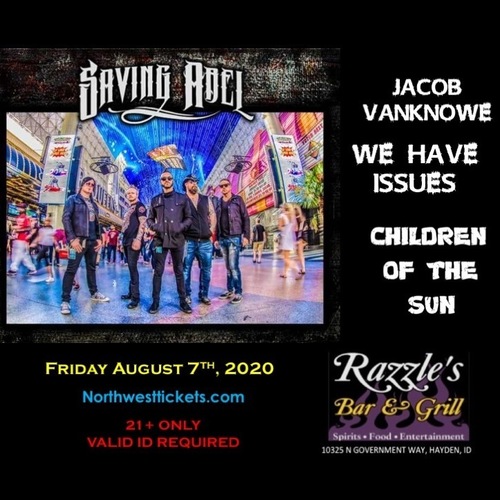 Tickets for this event are not available.

North Idaho is "ADDICTED" to Rock!

Since 2008 Saving Abel has embodied the definition of "Southern Rock." Even before their "Self Titled" debut LP, they were barnstorming the country making fans everywhere they went, just by being themselves. Simple, down-home, charming, country-boys with immeasurable talent that was destined to take them straight to the top. The band was signed by A&R wizard Jason Flom to Capitol records and their first single, "Addicted" did just that, reaching number one on several charts and the follow-up singles "18 Days" and "Drowning" helped sell over 750,000 copies of their debut album. They toured heavily in support of this album, playing with Buckcherry and Avenged Sevenfold, and later on Nickelback, in arenas across North America. Night after night, the boys would go back to the bus with their ears ringing from 15,000 fans screaming their lyrics. Knowing that they would need something great to follow up with, the boys set out to write their sophomore album on Capitol, "Miss America." Topping the Active Rock and Hard Rock charts yet again with "Sex is Good" and "Stupid Girl" solidified Saving Abel's place both on the radio and live. Setting out on their own tour this time, Saving Abel headlined theaters around the country for almost 2 years non-stop. They toured with several artists and made a lot of friends along the way, but always kept their focus on the fans, and their eyes toward the future.

The band started in 2011 in Spokane and quickly became staple of the local clubs and venues and a favorite amongst the local music scene.

Online ticket sales for this event have ended. Please contact the Box Office for more information.